Harvest Up Due To Saturday "Bump"

The harvest totals reflect a Saturday “bump”. On Saturday I harvest later in the morning. There's a bit more time for the tomatoes to mature but more importantly, the sun is higher and there are less shadows. I simply see the tomatoes easier in higher light. The higher totals for some of the front yard tomatoes and the back yard Green Zebra(1) are a direct result of simply being able to see better in the higher sun.

The volunteer is in a growth spurt. It's nearly as tall as Marz Round Green. There are no tomatoes on either plant.

We are now ahead of my original harvest estimate for August of 2700 tomatoes (2778).

Harvested Over 7500 Tomatoes For The Year!

I don't see any new blooms on Black Cherry, however. The plant is exhausted. Let's hope it has enough strength to get a second wind, like Yellow Perfection.

Posted by Unknown at 7:33 AM No comments:

Our last harvest of less than 100 tomatoes occurred on July 12.

The last few days have been cool in the morning and today it was actually a bit damp from the fog. This is unusually cool for an August morning. I guess I didn't feel motivated to root out all of the hidden and maturing Snow White tomatoes.

Due to the temperate weather, I'm seeing new blooms on several of the tomato plants. Whether this results in new tomatoes remains to be seen.

My wife watered the back yard tomato plants yesterday.

Posted by Unknown at 7:57 AM No comments: 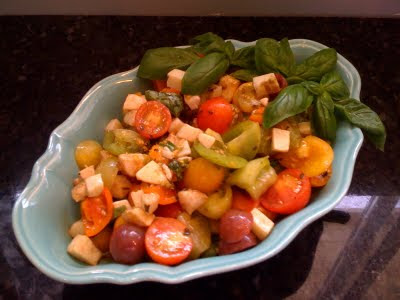 All but the cheese is from our garden.

Posted by Unknown at 6:21 PM No comments:

Some Plants Getting A Second Wind

Last night we held our computer user group meeting in Westchester (http://www.lafox.org). Our speaker was Jason Gordon and the subject was Drupal. We had a blast at the meeting! Later on my wife joined me at Jerry's Famous Deli in Marina Del Rey. We didn't get home until after 1AM. We slept well.

Posted by Unknown at 8:13 AM No comments:

Here's an email from one of seedling recipients...

You guys are having a great tomato season! I think this milder summer has helped a bit with the harvest. I've seen a lot of new flowers on our plants lately.

This week my husband and I harvested a few of the tomatoes from the seedlings you gave us!!! They were absolutely */delicious/*.

What we thought was a Gardener's Delight turned out to be Garden Peach! I thought it was weird when the tomatoes started turning yellow instead of red, I thought it might be diseased at first. LOL I realized it was Garden Peach when i picked one of the tomatoes and it was fuzzy. My husband and I both liked Garden Peach, that had a really nice flavor.

Our favorite so far (of the tomato plants you gave us) is definitely the Green Grape. OMG that is soooooo good, it has a really nice tomato flavor combined with the flavor of truffles!!! Add a slight drizzle of truffle oil, some goat cheese = heaven.

There are 3 tomatoes that are currently ripening on the Eva Purple Ball, can't wait to eat those.

We know that we'll definitely be planting Green Grape, Big Zac (our tomatoes have been averaging 1 lb, meaty tomatoes with little gel/seeds), Black Krim, Sun Gold, and Julia Child. My cousin gave me some tomato seeds for Black Krim, so I will try starting my own seedlings for next year. If they are successful, I will be sure to drop some off to you guys.

Thank you again for the tomato seedlings, they have turned out such great tasting fruit!

Posted by Unknown at 8:21 PM No comments:

These harvest numbers are elevated because I didn't harvest yesterday. They'll stay elevated for a couple of days before settling back down to the appropriate level.

I received a good question from a Facebook friend (I'm at http://www.facebook.com/billand88 – if you would like to “friend” me, just add a note) – will I reach 10,000 tomatoes this year?

Two years ago I changed out the dirt in the front yard and replaced it with compost, dirt and mulch from the city and ended up with 11,000 harvested tomatoes. I have many more plants this year, could I challenge those numbers?

In September 2007 we harvested 647 tomatoes, October 2007 only 26 tomatoes and I stopped counting because of the three week honeymoon starting in early October.

The prior two years experienced a dramatic slide in harvested tomatoes in September.

So....let's round up this month's estimate to 3500 tomatoes, estimate September to be, oh, say, 800 tomatoes. That would put us at 9200 harvested tomatoes at the end of September. October through December shouldn't generate another 800 tomatoes to reach the magic five figure mark. But if we harvested, say, 1200 tomatoes in September, 10,000 tomatoes is definitely a possibility.

Last night we met some good friends found through correspondence with this blog. They had twins a couple of months ago and they invited us over to see their twins. I was still showing the effects of sleeping for only 20 minutes the night before and was pretty subdued the whole evening. Going in, my wife and I probably expected to visit for, oh, say, 45 minutes or so but we were still going strong three hours later. Okay, I was getting wobbly. Though I did get in a strong late afternoon nap I needed to sleep some more. We talked tomatoes (naturally), compost, babies, babies, neighbors and more babies. It was a blast!

At lunch my wife and I met with our neighbor across the street and their child who is nearing three years of age. She's a smart cookie, that one.

Posted by Unknown at 7:58 AM No comments:

No Harvest This Morning

There were no tomatoes harvested this morning. I couldn't sleep so I came to work early.

There's a possibility I'll harvest in the afternoon

Posted by Unknown at 6:26 AM No comments:

I hadn't harvested Cherokee Purple in over a month but I'm iffy on the two harvested today.

I staked and caged the volunteer tomato plant yesterday.

As I type my wife is watering the front yard.

Posted by Unknown at 9:44 AM No comments: