Reached 9500 Harvested Tomatoes For The Year!

This blog post is late because my wife and I went to the Los Angeles Dodgers game this afternoon. We had to arrange to get tickets from Chris's brother, then pick up a friend of Chris in Pasadena and head to the game. I met with Chris's parents and sat in field level seats well off of the right field line not too far away from the foul pole. My wife and her friend were right in line with home plate on the second deck.

This game was a rout, with the Dodgers winning 12-1. It was notable for a couple of reasons. First, there was a grand slam in the first inning. My wife and I have been at two Los Angeles Dodger games this year and in both games there has been a Dodger grand slam.

Attached below is an image of a caterpillar eating a tomato, noted after today's early morning harvest. 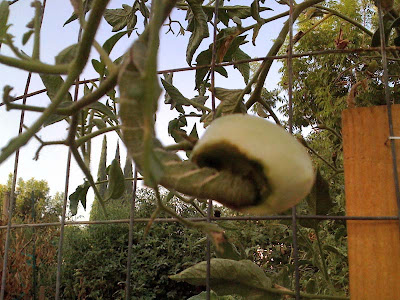 Posted by Unknown at 6:17 PM No comments: Links to this post

My wife watered a portion of the back yard yesterday.

It got up to 98 degrees yesterday, which will burn out some of the new tomato blooms.

Posted by Unknown at 7:44 AM No comments: Links to this post

Black Cherry and Yellow Perfection are near the end of their second wind. There's not a lot of fruit left on these two plants.

Even if the harvest totals “falls off a table” again, we'll easily double the original estimate of 700 tomatoes for the month.

I see some new blooms on Snow White(1) but I also understand we're supposed to get hit with another heat wave.

Hmmm....if we get 300 harvested tomatoes in both the front and back yards before the end of the year, we'll reach 10,000 tomatoes. That seems doable, so I have to say that it's now a possibility.

Posted by Unknown at 7:51 AM No comments: Links to this post

Tomatoes In The News

And here's more tomato stories in the news...

The State Journal Register (Springfield, IL) – Tomato Time – How To Avoid The Overload

and one year ago today:

Posted by Unknown at 8:08 PM No comments: Links to this post

Email ThisBlogThis!Share to TwitterShare to FacebookShare to Pinterest
Labels: Los Angeles Times, Tomatoes In The News

My wife watered portions of the front yard on Monday.

Today is the one year anniversary of the article featuring me on the front page of the Los Angeles Times. I'll link to this story in a separate post.

Posted by Unknown at 8:08 AM No comments: Links to this post

It's Our Second Anniversary!

I know for a fact I picked a Sweet 100 and put it in the harvest basket, but when I pulled out the tomatoes for counting it had disappeared. Oh well.

We've now harvested over 4500 tomatoes from the front yard (4515)! I've noted that some of the front yard tomato plants (especially the two Snow White plants and Dr. Wyche's Yellow) are more green due to the cooler weather. I don't know if that will mean another run of tomatoes out of these plants but it does mean they are still quite healthy.

Last night my wife and I had an early celebration of our second anniversary at a nearby Argentinian restaurant. The food was delicious. We spent most of our time wondering how two years went by so fast.

If you were at our wedding two years ago, you know how much fun it was for everyone involved. Please add your memories to the comments section of this thread/post. Thank you!

We Met The No-Dig Garden Guy

The weather was cooler yesterday (and today) and, coincidentally or not, the harvest numbers dropped. The totals are coming back in to the range experienced late last month.

We've reached 300 harvested tomatoes for Snow White(2)! The Snow White(2) is one of our strongest plants, a late bloomer (literally), and it wouldn't surprise me to end up with over 400 tomatoes by the time the harvest is over.

Before I get into what my wife and I were doing on a Sunday afternoon, I'll need to set the stage.

In June of 2008 there was an article in the Los Angeles Times about how to make mulch from hay. I thought it was something terrific and almost perfect for what we were doing. We saved the newspaper article but never got around to implementing it for this season (The article can be found here.)

So we corresponded and my wife and I came by to visit yesterday afternoon.

What a blast! Pat and his girlfriend couldn't have been more gracious hosts. We talked and talked and walked through their terraced garden. They talked about their No-Dig vegetable garden and showed us around while my wife took notes on her iPhone. I discussed techniques we use when planting and growing tomatoes...and the hours flew by.

Later on inside they tried some of the tomatoes we brought. They were cutting up the tomatoes when I stated “These tomatoes are good but they're not quite as good as earlier in the year...” By that time they were sampling them and loving the taste of these tomatoes. Man, have I become such the tomato snob.

We're going to keep in touch, that's for sure!

Then we paid a visit to our “seed lady” and spent a few pleasant hours with her.

Now I'm looking forward to preparing our soil for next year!

Posted by Unknown at 7:49 AM No comments: Links to this post

Yesterday my wife went to a worm composting class with our friend Liz. I was going to come but I had some new consulting work.

My wife came back with the worm compost materials and a bag of worms, plus a bale of hay. I'm not sure what the hay is for, but what the hey! We assembled it and we have our own worm composter as a complement to our regular compost bin made last week. The pulled tomato plants went in to the regular compost pile.

We've reached over 1000 harvested tomatoes for September (1082)! Again, I have no update to the original estimate of 700 tomatoes for the month. I know the harvest numbers will fall but I thought they would have fallen much quicker than they have. I'm happy for that!

If we continue harvesting around 80 tomatoes for a few more days, 10,000 tomatoes will be a possibility.

We hadn't harvested a Pierce's Pride in over a month.

The tomatoes from the volunteer look exactly like Old Ivory Egg.

Posted by Unknown at 12:08 PM No comments: Links to this post

Tomatoes In The News

This is the first of a new series of columns: Tomatoes in the news.

Des Moines Register – Grower Follows Her Tomatoes To The Table

The Washington Post -- When a Garden Loses Its Light, What's a Tomato Grower to Do?

Posted by Unknown at 1:02 AM 2 comments: Links to this post